The Catholic Church, the mightiest religious organization on the planet, is currently busy with the Amazonian Synod in the Vatican. This Synod is frowned upon even by many Catholic priests as it focusses on appeasing the beliefs of indigenous people such as those in the Amazon jungle, with their beliefs in Spiritism and worshipping the earth.

A poster of a topless indigenous woman breast-feeding a weasel is among the many graphics being used to publicize the infamous Amazonian Synod presently underway in Rome. LifeSiteNews videographer Jim Hale was able to obtain this footage while documenting the Synod in Rome. 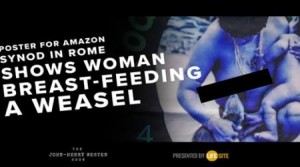 Disgusting as it is, there is more to this than meets the eye. It derives from Pope Francis’ eco-encyclical Laudato Si, which underscores the synod. What they’re saying is that everything in creation is “interconnected,” that we are “related” to the animals, and it uses this degraded imagery to make the point.

According to the synodal architects, we’re just animals. The synod is about our “ecological conversion” and oneness with the planet, not about our oneness with Christ. It calls upon the Church to bow to the planetary idol and make “reparation” to “Mother-Earth” for the “sins” committed against her. It dignifies the superstition of pagan culture and seeks to pollute the Church therewith. It is truly the work of Antichrist.

Mr. Hale was also able to capture on film a most deplorable scene inside of St. Peter’s Basilica—a nude Mother Earth idol along with Pope Francis and various cardinals chanting, dancing, and praying before the statue. The nude idol along with other shocking exhibits are now on display in the Santa Maria in Transpontina Church, just down the street from St. Peter’s. It appears that the Eternal City has become a forum for globalists.

That Rome should descend to such diabolical depths that would have the hierarchy carousing around this latter-day golden calf is a clear testament to the apostasy of our times. These shocking events immediately call to mind Christ’s prophecy concerning the divine wrath of the last days that would ensue in the wake of the abominations that would pollute the Sanctuary. As he says:

“When therefore you shall see the abomination of desolation, which was spoken of by Daniel the prophet, standing in the holy place: he that readeth let him understand…. For there shall be then great tribulation, such as hath not been from the beginning of the world until now, neither shall be. And unless those days had been shortened, no flesh should be saved: but for the sake of the elect those days shall be shortened.” (Matthew 24:15-22)

The synod also calls to mind how God many times in the Bible had punished the Jews for turning to strange gods worshiping idols in their groves. Is history about to repeat itself? ”

The book of Revelation tells us about a woman who rides the beast.  There is a painting of this in the ceiling of the new European Union (EU=read New World Order) parliament building in Brussels, Belgium. It is also known as the Tower of Babel Design. The new EU parliament building in Strasbourg, France also has a mural of a naked woman riding a beast. Then there is the prominent Bronze Statue of a Woman Riding a Beast outside the Brussels headquarters of the Council of Europe. In Rev 17 and 18 we find powerful clues as to this woman’s identity. She holds a powerful position in the Antichrist’s future empire. The two chapters in the Book of Revelation makes the woman’s identity clear beyond any reasonable doubt; she is the Roman Catholic Church. 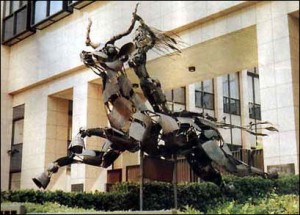